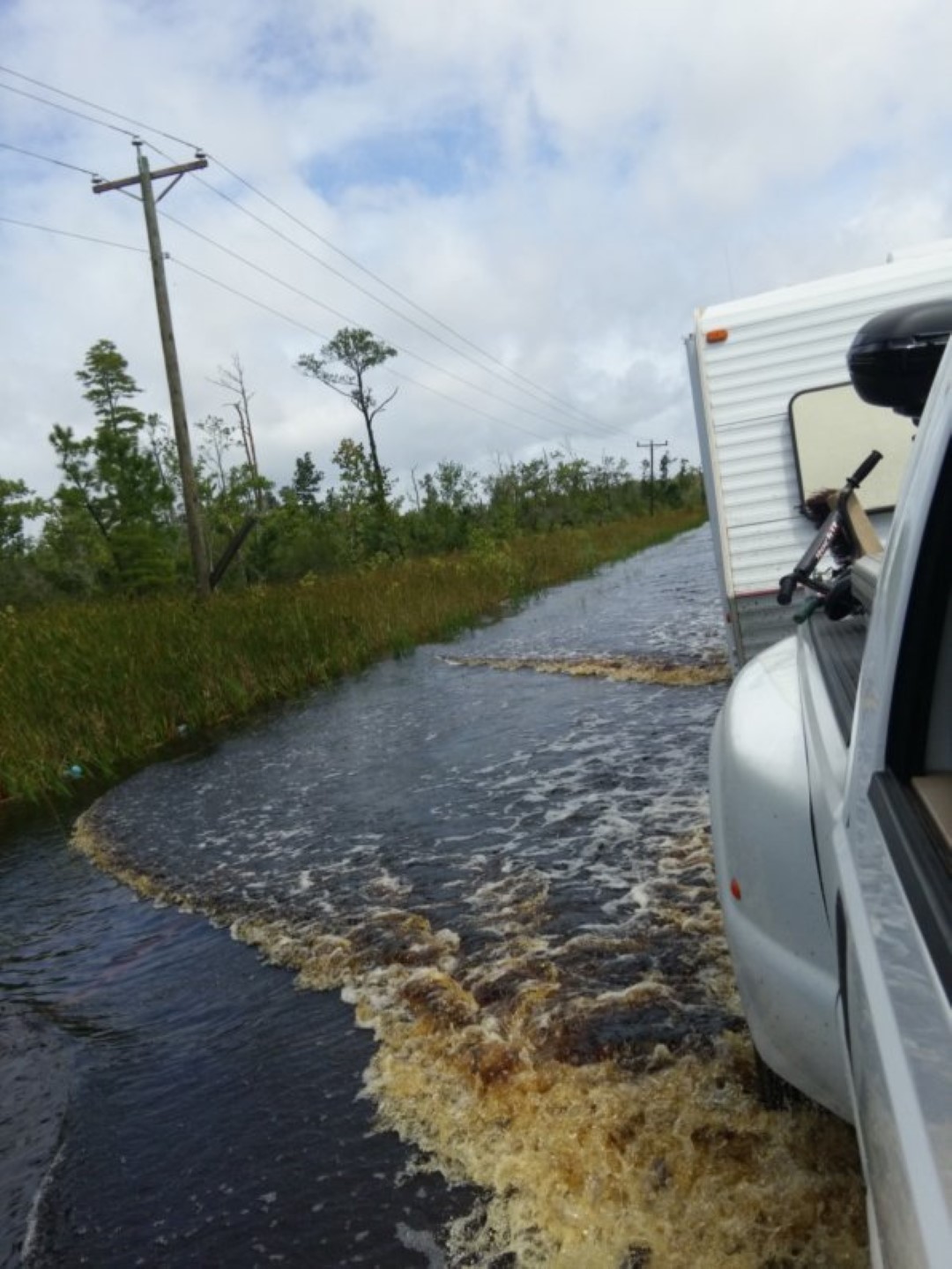 And then there was the time we drug our tiny home on wheels right through a hurricane so we could dig our toes into the North Carolina sand….

We had been full timing at that point for a couple of months and had settled well in to the lifestyle. Due regulations in the area we were moving the trailer between campgrounds every few weeks, so one weekend when we had to pack up anyway Tom decided to surprise us with a trip to the beach. I think I’ve documented well up to this point that forethought isn’t quite a specialty of the Blue World. This became all too evident while we observed a strong storm forming amidst our packing up, drawing our attention to the hurricane that was evidently heading for the NC shore. A forecast that had, until this point, completely evaded our attention. If you know Tom well you’d know how he would not let this forecast ruin his plans. He was going to the beach, and a little hurricane wasn’t going to stand in his way. If you know me well, you’d know that the drops that were now falling from the sky didn’t roll off my back quite to easily.

As an aside I’m going to let you into a little secret of the Blue World. I don’t travel well. Probably a strange admission for someone who travels fulltime, but there it is nonetheless. For the first 22 years of my life I escaped ever having experienced a car accident. Then I had one, and a fairly traumatic one at that. Everyone was fine (not so much my car), but I was pretty shaken. Then a few weeks later I had another one involving a very confused deer, a totaled rental car, and a happy hillbilly who went home with some free game. For the next couple of years I added steadily to my experience in wrecks, ranging from fender benders to more totaled vehicles. Including one accident while in the last trimester of each of my three pregnancies. By the time we started traveling I had developed a bit of a phobia of driving and, even more so, riding in cars. I still did both, but as Tom can attest I was a horrible backseat driver, panicking at every car that came too close. All this to say I was already a nervous passenger on our travels, and adding in hurricane conditions while hauling our home was maybe more than I was willing to endure for some sand and surf.

But I had signed up for adventure with this man, so I climbed in to (the edge of) my seat and buckled up. The first leg of the trip was uneventful.  Some menacing clouds, but so far the storms held off. We spent the night in a campground that consisted of an open field with hook ups, and I startled awake frequently with every gust of wind (when your home can be tipped over in a strong storm you experience a whole new anxiety with inclement weather). The sky bore no better outlook the next morning, but we’d come halfway and Mr. Adventure wasn’t about to stop there. So we pushed on. Through strong winds, through closed roads. Through flooded streets that we had no choice but to drag our home through, as we prayed the standing water wasn’t deeper than it looked.

We finally got within ten miles of our destination and stalled as the now only available bridge to the island was closed. The scene was surreal. The clouds were threatening as ever and the town had come to a standstill. People were outside wandering the streets, gathered in the gas station watching the news footage in hushed awe. With the road before us closed, and the one behind us blocked with water, we parked the trailer on the side of the main road and departed in a bit of a haze to try and gain some more information. After asking around we found out that the bridge had closed after a tractor trailer had blown over while trying to cross, and they were unable to clear the wreckage due to the winds. We also found out that, tragically, the driver had been killed in the accident. Remember that anxiety I was feeling before we left? It was now raging as full force as the winds outside. I begged Tom to take us back, but another factor was in play. We were running dangerously low on fuel. The closest station that sold diesel was- you guessed it- on the island. We didn’t have enough to get us back the way we came even if the roads hadn’t been flooded, so moving forward was our only option. I tried to bide the time waiting for the bridge to reopen as calmly as I could, hoping not to alert the kids to the unrelenting dread I was feeling. We shared a meal at the convenience store restaurant (which I am sure had never had as much business as it did on that day), watching and waiting. At last the bridge was cleared and we prepared to finish the last leg of the trip. I prayed harder than I ever had before as we slowly crossed over the bridge, knowing my beloved trailing home was now putting us at extra risk of being blown off course. I channeled my mom’s fear of bridges and tried to hold my breath until we reached land, but failed half way through. After what felt like a lifetime, I saw through squinted eyes that we had made it! I breathed a heavy sigh of relief, though the storm was still threatening ahead of us. We refueled and asked around about conditions on the end of island where we were headed. The locals at the gas station suggested heading back, but the campground insisted the worst was over so we decided to press on. After all, we’d come this far!

Eventually we pulled in to Camp Hatteras and I resisted the urge to kiss the ground of our beachfront campsite. The clouds parted, the sun warmed the anxiety from my overworked heart, and we took a long stroll on the all but deserted beach (while enjoying a free full body microdermabrasion courtesy of the sand and lasting storm winds). The next day all that remained of the storm were some flooded roads and a few downed trees. The weather was near perfect and we go to enjoy our hard earned weekend at the beach. The campground was very nice, with beachfront campsites, a playground, and crafts for the kids. We reveled in fellowship during the beach side church service, an experience my soul won’t soon forget. And as we watched the sunset from the beach during our last night there, I whispered some words into Mr. Adventure’s ears that he hears far less often than he deserves- “Thanks for making us come, you were right.”